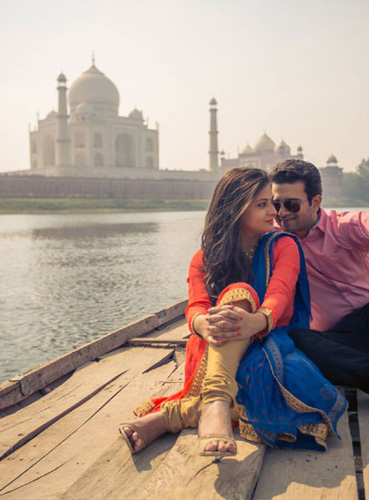 Agra was the chosen city of the Mughal emperors during the early years. It was here that the founder of the dynasty, Babur, laid out the first formal Persian garden on the banks of the River Yamuna. Here, Akbar, his grandson, raised the towering ramparts of the great Red Fort. Within its walls, Jehangir built rose-red palaces, courts and gardens. Shahjahan embellished it with marbled mosques, palaces and pavillions of gem-inlaid white marble. Agra is globally renown as the city of the Taj Mahal, a monument of love and imagination, that represents India to the world.

History of Taj Mahal India
The origin of the name the "Taj Mahal" is not clear. Court histories from Shah Jehan's reign only call it the rauza (tomb) of Mumtaz Mahal. It is generally believed that "Taj Mahal" (usually translated as either "Crown Palace" or "Crown of the Palace") is an abbreviated version of her name, Mumtaz Mahal (Exalted One of the Palace).

Built principally as a military establishment by Akbar in 1565, the red sandstone Agra fort was partially converted into a palace during Shah Jahan 's time. Though the principal structure was built by Akbar, many more additions were made by his grandsons. This massive fort is 2.5 kms long and is considered as the predecessor of the Delhi Red fort. The colossal walls are 20 feet high and the whole fort is encircled by a fetid moat. Amar Singh gate towards the south is the only entry point in the fort . The building and structures inside the fort gives an impression of a city within the city. Many of the buildings inside the fort are now closed for the public. The marble pearl mosque inside the fort is one of the most stunningly beautiful mosques in India. The monuments insided the fort are described below in detail.

Itmad Ud Daulah
Itmad-ud daulah, one of the most beautiful of Mughal tombs, stands across the river Yamuna from the Taj Mahal, nearly one and a half kilometers up-stream. Belonging to the age of Jahangir, it contains cenotaphs of Mirza Ghiyas and Asmat Begum, parents of the powerful Mughal Empress Nurjahan queen of Jahangir, an exceptional beauty and an astute administrator. Mirza Ghiyas had left Persian in sheer penury in search of better prospects at the Mughal court. He benefited much from the influence of his daughter who he had once abandoned in the desert. Akbar offered him a good rank and privileges. Jahangir made him his prime minister with the title Itmad-ud-daulah (Pillar of the State). Nurjahan's brother Asaf Khan later became prime minister of Shahjahan. This Persian family formed at the Mughal court giving the grand Mughals two most celebrated queens­-Nurjahan and Mumtaz Mahal (Lady of the Taj), daughter of Asaf Khan.

Sikandra
The Mughal Emperor Akbar, known as Akbar the Great, ruled an empire that stretched across North India from 1556 to 1605. His reign is considered the pinnacle of Mughal rule in India Akbar's tomb is located in the serene ambience of Sikandra 3 km away from Agra. Akbar began building it during his lifetime and his son, the Mughal Emperor Jahangir, completed it. Some of its design features are similar to the design of the Taj Mahal built later in Agra. Akbar's tomb at Sikandra has a large arched entrance and green lawns, on which deer can be seen grazing, surround the tomb.

6 - The timings are 2030 to 2400 hours.
7 - Tajmahal for moonlight visits shall NOT be open to visitors during the month of RAMZAN.

We offers chauffeur driven car rentals in Delhi Agra & Jaipur City for both business and leisure. We have a large fleet of cars including, budget, standard, semi-deluxe, deluxe, semi-luxury and luxury cars. With our car rental services in Agra we also provide Agra half-day or full-day sightseeing tours by car of your choice.We also provide day return trips to different near by cities and tourists places by car of your choice.